An Historic Look at Atwater Park

This page contains information developed by historic researchers, published books and articles, and other authors, as APCA seeks to keep the past alive in the hearts of Atwater Park residents.

The following introduction to the Atwater Park Neighborhood is provided by

Springfield Preservation Trust Copyright 2010
Much of the Atwater Park neighborhood was developed from the 300-acre estate of George Atwater, founder of the Springfield Street Railway. Ten years after his death in 1902, the Atwater heirs hired the Boston firm of Frederick Law Olmsted, Jr. to create a plan for a pleasant residential area. 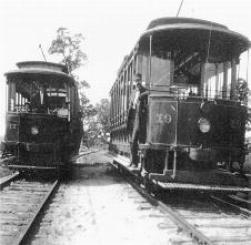 The neighborhood's park-like setting, proximity to Springfield Hospital, and access to the trolley line encouraged development. (A remnant of the trolley tracks can be seen at Atwater Road and Crestwood Street). Prior to the Great Depression, many houses were built in the popular Colonial Revival and Tudor Revival styles. Noted residents over the years include early aviatrix Maude Tait Moriarty, impressionist painter Harriet Randall Lumis, 'live' cork-centered baseball inventor Milton Reach, and Mass Mutual president Betrand Perry.

Here, looking westward, we see the sweet fields of West Springfield beyond the swelling floods that roll under the North-end bridge. But that is a side line, and in following the inner line of the chain, of which but few links are missing, we must turn eastward by Wason avenue where, after crossing Main street, we face the wooded bluffs of Rockrimmon. This large tract belonging to the Atwater estate has been virtually an open natural park for nearly half a century. It is wholly unadorned, some portions of it primeval, in fact, and thereby all the more delightful. There is no other spot within many miles of the city where, to judge from the natural conditions, the wild fox would be more likely to dig his hole unscared, where the deep forest song birds find themselves so much at home and where, not the real copper-colored flesh-and-blood aborigines, but their pathetic ghosts, would be more likely to revisit the glimpses of the moon.

This entire tract, keeping close to the Chicopee line, is full of picturesque revelations in the immediate surroundings and in the frequent views across and up and down the valley where the broad river gleams and glistens. When the roads passing through this tract are definitely located and perfected, as they are sure to be in the future, there will be no more charming suburban drive than through this part of the encircling boulevard.

After leaving the constantly varying bluffs and deep ravines of the Rockrimmon region and turning toward the south, we pass through and across the source of the city's first great public waterworks—great at the time they were undertaken,—the Van Horn reservoir, as safely as Moses and his tribe passed through the Red Sea, and in far less time, unless we stop to admire the western view across the water or to walk around the borders of the upper portions.